You are here: Home / Entertainment / Rock Band 2 for Wii Review 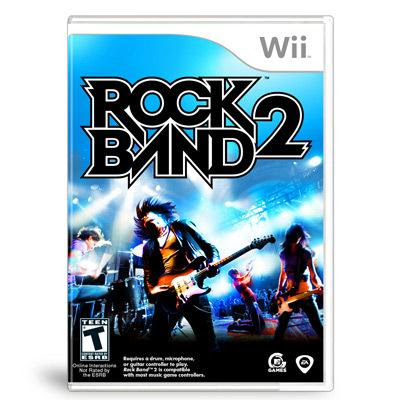 My daughter, husband and I (not your typical rock band!), recently reviewed EA’s Rock Band 2 for Wii. Now you won’t get a very technical review from me, as I am not a “gamer”, but I can tell you our experience with this game and our thoughts based on the “fun factor”.

We had previously tried Guitar Hero, and I just could not play the guitar. No matter what. My kids thought it was funny to tease me, but they never really gave me a fair shot. On this game, I rocked it – seriously. I was jammin’. I think even my daughter was impressed, though she will never admit it.

We took turns playing the drums, guitar and microphone. I thought I would be good on the drums, but I wasn’t. I found that the little circles in the middle of the drums were hard to hit, while concentrating on hitting the right colors. Perhaps with more practice I will be good on them. My daughter, however, played really well on the drums. I was amazed when she tried the Beat Training. She was going really fast and keeping up. My husband was pretty good as well.

When we all played together, we didn’t sound too bad! I let my daughter use the microphone, as her voice sounds the nicest. All of the instruments have “Energy” which is helpful when one band member is not playing well. This can potentially keep you from getting booed off the stage, as your other band members can try to save you. There is quite a variety of music to play too, so if you are not great at one song, you can always choose from plenty of others.

Rock Band 2 lets you and your friends take your band on an even more expansive and immersive world tour and continue your rock and roll fantasy.

Harmonix, deliver Rock Band 2, the next step to the platform that lets audiences of all ages interact with music in an all-new way. Rock Band 2 lets players vicariously jam out as some of the best guitarists, bassists, drummers and singers of all time.

Featuring a track list with more than 80 on-disc tracks from some of the most hallowed bands of the rock pantheon, Rock Band 2 by challenges rockers to master lead guitar, bass guitar, drums and vocals.

There are a lot of different options for this game, including Quickplay. We really liked this option as it allowed us to get onstage without a lot of hassle. It was really a quick way to get going. Another option is Tug of War, in which it’s just you versus another musician in a battle of skills. There is also Score Duel where you can compete against your opponent, using the same instrument, and same difficulty level.

Overall, we agree that this is a highly entertaining game for the family. It provided a great opportunity for us to all hang out together. We had a blast and there was much giggling initially. Everything you need comes with the game: CD Rom, Guitar, Microphone, Drums and drumsticks. Rockband 2 for Wii is rated “T” for Teen. You can find out everything you need to know at the official Rock Band 2 website.

Thanks for stopping by! My name is Jennifer and I am the owner/author of Eighty MPH Mom. I started this website in 2009, as a hobby more or less. My kids were little and I was a "mom blog" at the time. The kids are grown and we have evolved into more of a lifestyle blog now. I reside in Central Oregon, and I love the beauty of the area. I have two children - 23 and 30 {gulp}, four cats, 1 rooster and one husband. It's kind of a madhouse around here! To read our most personal {and best} work, please click on the "best of" tab in the top right hand corner of our home page.
*Ranked #8 on Cision's 2013 Top 50 Product Review Blogs
*Ranked #28 on Cision's 2014 Top 50 U.S. Mom bloggers!