You are here: Home / Reviews + Giveaways / How to Train Your Dragon Video Game for Wii Review

Based on the Dreamworks movie ‘How to Train Your Dragon‘, the new video game of the same name from Activision launches gamers into a third-person action-adventure as a Viking hero where they must embark upon an epic quest to become the ultimate dragon trainer. Players explore an island of challenges and movie-inspired environments including the Vikings’ Village, Wild Zone, Training Zone and Fight Arena as characters “Hiccup” or “Astrid.” Gamers train their dragons, navigate through environments and participate in prestigious dragon tournaments for a truly larger-than-life adventure. Friends and family can square off against each other in head-to-head multi-player combat in a variety of unique arenas, offering a social and competitive element to gameplay as they fight and fire their way to Viking victory. 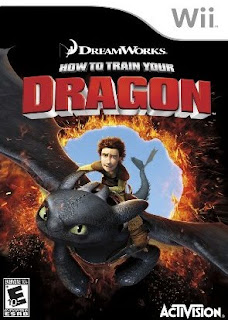 We were sent this video game for review, and my daughter thought it was really fun, even though she hasn’t seen the movie.  It is exciting, and allows players to be creative when they create their own dragons,  She thought this was especially fun!  This game is rated E10+ (Mild Fantasy Violence).  My daughter is 13 years old and found it to be very entertaining (and that is saying a lot – she is easily bored!).  She only played this game by herself, but it can also be played with friends or family for even more fun.

KEY FEATURES OF THE GAME:

Create Your Very Own Dragon – The “Create Your Dragon” feature allows players to customize six different types of dragons, providing virtually unending combinations of ways to modify your dragon’s appearance.
Train your Dragon for Battle – “Level Up” your dragon’s speed, power, fire and other abilities through intense training to face the critical Viking challenge of becoming the ultimate dragon trainer.  Then use your arsenal of trained dragons to battle friends in a variety of unique environments.
Pick up Where the Movie Left Off – Players enjoy an all-new post-movie adventure as they jump into battle as their favorite characters. Explore the picturesque Island of Berk as Hiccup or Astrid in Adventure Mode or experience fierce battle action in Arena Mode as you fight for your crown as ultimate dragon warrior.
Head-to-Head Multiplayer Mode – Arcade mode allows friends to select their dream team of four individually customized dragons or dragons chosen from the arcade roster, then jump in and battle against each other. In addition to Astrid and Hiccup, additional characters are playable in Multiplayer Mode including Tuffnut T., Ruffnut T., Fishlegs, and Snotlout.
Mini-Games – Mini games include Ice Sculpting, Looping Race, Flying Sheppard, Memory Torch, and Puzzle Dragon.  Excelling in Mini-Games earns players experience points toward leveling up your dragon, winning gold and other items to help care for dragons. 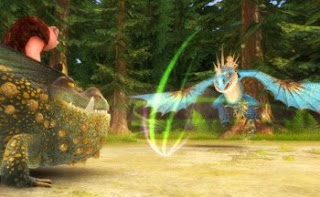 You can also enter to win below!

The giveaway is now closed:

Thanks for stopping by! My name is Jennifer and I am the owner/author of Eighty MPH Mom. I started this website in 2009, as a hobby more or less. My kids were little and I was a "mom blog" at the time. For several years we had a team of seven moms, and mostly wrote about everything related to children. But much like the kids have grown and evolved, so has Eighty MPH Mom. We now focus mostly on food, cooking, home & garden, and DIY. We are more of a lifestyle blog now. I reside in Central Oregon, and I love the beauty of the area. I have two children - 23 and 29, four cats, 1 rooster and one husband. It's kind of a madhouse around here! To read our most personal (and best work), please click on the "best of" tab in the top right hand corner of our home page.
*Ranked #8 on Cision's 2012 Top 50 Product Review Blogs
*Ranked #28 on Cision's 2014 Top 50 U.S. Mom bloggers!