You are here: Home / Humor / I’m a Little Freaked Out – Crop Circles in my Bathtub!

A few months ago, I noticed shell shaped outlines on the bottom of the kids bathroom (my kids are 13 and 19). I thought it strange, but figured my daughter must have a mat or something that left the imprints there, and I dismissed it.

These have appeared a few more times since, and again, I thought the same thing. I cleaned the bathtub yesterday – sparkling clean – and today after my son finished his shower, I went in there to take a bath (as my bathroom doesn’t have a tub). I looked in the bathtub and saw this: 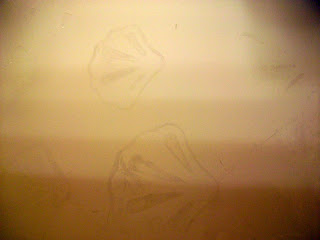 The bathtub is white, so pardon the picture. But that is the bottom of the bathtub – there is no non-skid mat or anything – just porcelain. I called my daughter in there and asked her where the “crop circles” came from. She looked just as surprised as me and said she had no idea where they came from. I knocked on my son’s bedroom door and asked him the same question – he had no idea either. I asked if either of them use a mat or anything on the bottom of the tub when they bathe or shower. Nope. I started thinking that maybe he wears flip-flops in the shower (he did this in the dorm bathrooms, as it was recommended) and he said, “Mom – I don’t know where those marks came from – it’s not me”. I looked through the cabinets to see if there was anything with a shell print on it – and came up empty handed.

This is just so random and weird, and I am completely baffled. They appear, and nobody knows where they came from or what they are. It is quite a mystery to me. Like life doesn’t keep me on my toes enough – now I have seashell shaped crop circles in my bath tub! Has anything mysterious like this happened to you before?

Every bit helps to keep Eighty MPH Mom up and running – thank you!

Thanks for stopping by! My name is Jennifer, I am the owner/author of Eighty MPH Mom, and I reside in Central Oregon. To learn more about my team and I, click the "About" tab above. Our "Best of" section is a great place to start too!