You are here: Home / Food Finds / Burger King – are you serious? This is no Whopper!

I don’t normally write posts about things like this, but I was so completely annoyed and quite shocked actually, that I just had to write about it.

Yesterday morning my husband went into work for a bit, and called on his way home to see if I wanted anything from Burger King.  I was starving and asked for a Whopper Jr. with cheese.  He arrived quickly thank goodness, since I was SO  hungry.  I expected a burger where the patty at least met the edge of the bun!

I unwrapped my Whopper Jr. and this is what I saw: 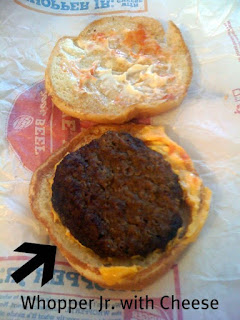 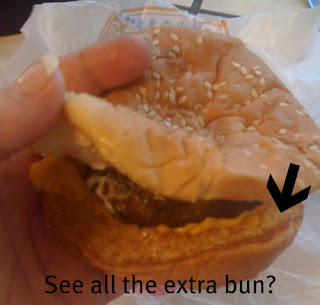 Wow.  Just wow. There was nothing “whopperish” about this burger.  Granted, I didn’t want a humongous burger – which is why I didn’t order a regular Whopper. I wanted something in between the regular little cheeseburger and a Whopper.  Fair enough, right?  For comparison purposes, I took these pictures: 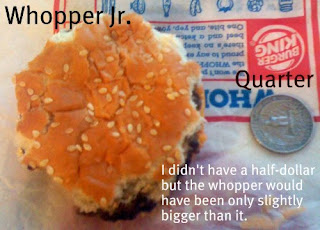 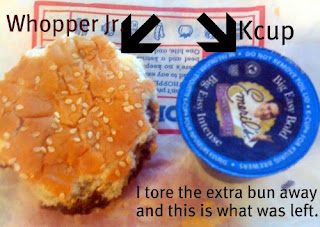 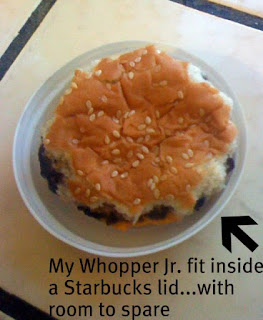 Yeah.  I was pretty disappointed. It took 4 bites to eat the tiny thing. Was it satisfying? Hardly. I was still starving.

It also didn’t look a thing like is advertised. There were some onions, pickles and wilted lettuce smooshed in there (which I removed – blech), but in no way did it resemble the picture they show of the Whopper Jr. on their website.

I’ve got nothing nice to say right now…