You are here: Home / People / Marriage + Family / My Son is lucky to be alive (car wreck) – and a shout out to Honda

My son called Saturday afternoon and said he had been in an accident (he called from the scene). His voice was shaking and he could barely speak. He was hit by another college student driving a new Camaro (with only 2,700 miles on it).  My son’s car was t-boned and his car was thrown all over and spun around – the passenger side of the car landed on/at the sidewalk, flattening that tire. He is okay now, but was horribly shaken for a couple of days. I was a mess myself, of course, not being there for him when it happened. I did hear a lady in the background helping him, (she brought him water, etc). To the nice woman who helped my son while he was terrified and alone, I thank you.

Let me go back a bit. I bought this Honda when it was brand new, and it had all the bells and whistles – sunroof, 6-CD changer, V-6, automatic everything. I babied this car and it was my pride and joy. When my son began to drive, we bought him an older Honda Accord.  A few months later, I won a car, so my husband and I decided to give him my current car and sell his old one. Our reasoning was that since it is newer, it is ultimately safer. A lot of things have changed in auto safety in between the years of his old car and the one we gave him. The car we gave him (my old one) was in beautiful shape.

I came down here yesterday to be with my son and help him sort through everything. Insurance called me this morning and said the car was totaled. She said we needed to go to the storage yard and clear out the car. I was horrified with what I saw. 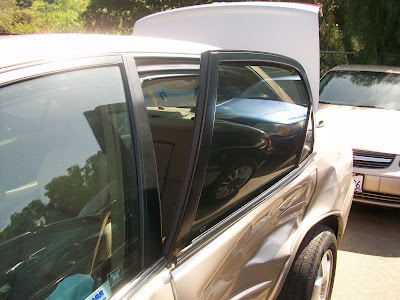 And the “good” side of the car – the hood won’t shut completely.  The tire flattened when it hit curb: The side airbag deployed: 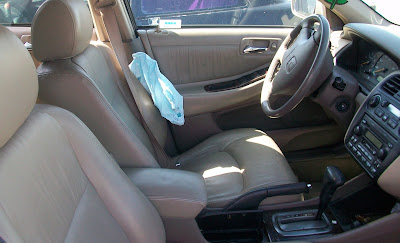 As I looked at his car, I had several thoughts running through my head.  I thought how VERY lucky he is to be alive and how lucky that the impact wasn’t directly on his door.  I then remembered why we gave him this car.  Sometimes I do think things happen for a reason. Had he been in his previous car, I don’t know if he would have been so lucky.  Part of the reason this amazed me so, is when I saw the damage to the other car – a heavy Camaro.  If it was damaged this badly, then the impact was very, very strong. The Honda that my son was in must have been incredibly strong and well built, and it was definitely designed for safety.  Here is what I mean: 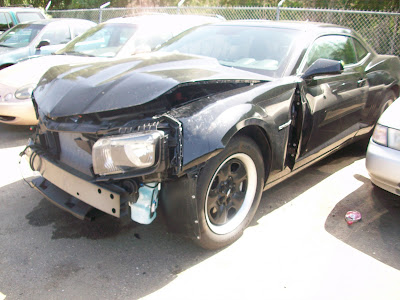 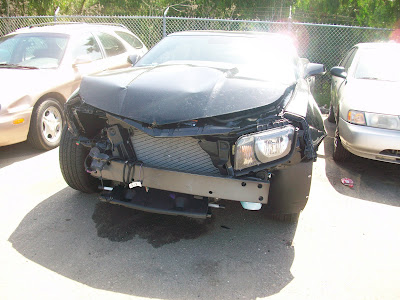 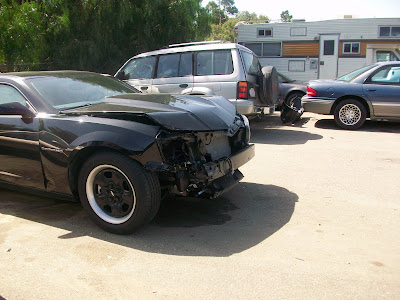 I thank God that the young man in that car was okay too. This accident could have been so devastating. Both are college kids who are very, very lucky.  They both walked away from this accident with no injuries. I know my son has a new appreciation for driving safely now, but I am not sure he is anxious to drive a car anytime soon.

I have been doing some thinking too, needless to say. I mentioned above how I babied that car.  Well, I also babied my little boy – and he is far more important than any car.  I couldn’t love him anymore than I do.  He has handled this amazingly well, has come to some realizations of his own, and I don’t think he will ever take life for granted anymore.

I realize that there is no object in the world that can take the place of a person you love so much.  The very purpose of giving my son this car, is what saved his life. Though it is sad that a great car is totaled, it did exactly what I had hoped in the event my son was ever in an accident – it saved his precious life.  I am one thankful Mom to have my son still with me, and also that another mother and father still have their son with them.

Honda – I am eternally grateful.