You are here: Home / People / The View Week of February 22nd – What Are Your Thoughts on Octomom Nadya Suleman?

I posted yesterday about Indiana Senator Evan Baythe’s appearance on The View today. It was very interesting to hear his thoughts – I hope you had a chance to catch The View today! Also on the show today was Jordan E. Goodman. He told us more about the Sweeping Credit Card Reform Act that takes effect today. We learned about how to really protect ourselves, and he also discussed his book ‘Manage Your Debt’.  I could write an entire blog post about the Sweeping Credit Card Reform Act, but you definitely want to check out what he had to say. Remember you can watch full episodes of The View by going to their website.

I also want to give you an update on some other exciting guests coming to The View this week. I am so excited – this should be very interesting!

Tuesday, February 23rd – The cast of MTV’s Jersey Shore will be on to chat with the ladies. The hosts frequently bring up the controversial cast in the Hot Topic discussions – I have a feeling that this face-to-face interaction between the cast and the hosts will be very intriguing! 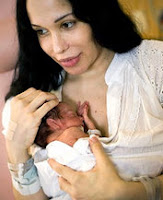 Wednesday, February 24th – Guess who? Nadya Suleman. The 34-year old “Octomom” gave birth in 2009, to the second full set of octuplets born in the United States. This will be her first trip ever to New York, and she will be sitting in the guest host seat to talk to the ladies. “Octomom” has been a popular subject on The View in the past, as she also has six other children, and is a single mother on public assistance. I am especially excited to see what transpires from this appearance. Also on Wednesday’s show – Danielle Steele. She will be talking about her new book, “Big Girl”.

Thursday, February 25th – a one-hour show themed “Trying to Have a Baby?” and will feature the stars of the Style Network’s Bill and Giuliana Rancic to discuss their infertility struggles. There are so many couples who are in this same situation and it will be fascinating to hear from them, and hopefully learn from them. Infertile audience members will also be sharing their experiences.

Friday, February 26th – A great way to wind down the week! A couple (no pun intended!) of my favorite people will be on The View. Regis and Joy Philbin will be performing a song from their new CD!

Which day are you most excited about on The View this week?
What questions would you ask Nadya Suleman if you were given the chance?
Do you have any thoughts or comments you’d like to share about “Octomom”?
I am a participant in a Mom Central campaign for ABC Daytime and will receive a tote bag or other The View branded items to facilitate my review.

Previous Post: « Kelly’s Cake off for a Cause and chance to win an Electrolux Range!
Next Post: The Winter Purina Incredible Dog Challenge – too cute! »