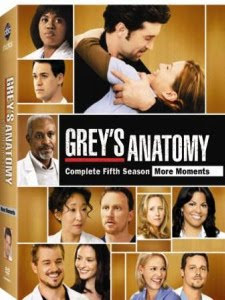 Two of my favorite shows are being released on DVD shortly! Grey’s Anatomy – Fifth Season and Private Practice – Second Season will be available on DVD on September 15th!

I have been a Grey’s Anatomy fan for so long – I am sad when each season ends (always on a cliffhanger!), but so happy when it starts again. Lucky for me, I got to review the fifth season recently. It was fun to catch up and to add this set to my personal collection. I also reviewed Private Practice. This show hasn’t been on as long as Grey’s Anatomy, but it definitely has the same appeal and I am hooked!

Private Practice: The Complete Second Season, comes to DVD on September 15, 2009 from Walt Disney Studios Home Entertainment. Every gripping Season Two episode comes packaged in this multi-disc collection, which also includes exclusive bonus features that go behind the scenes with cast and creator for an in depth look at a unique series.

Private Practice is a show about the personal and professional lives of a group of passionate doctors. Featuring steamy story lines and a dazzling ensemble cast, the show stars Kate Walsh reprising her “Grey’s Anatomy” role as Dr. Addison Forbes Montgomery. With Seattle Grace Hospital and all its complications behind her, Addison embraces the sunnier weather and new possibilities of the Oceanside Wellness Group in Los Angeles—but life and love are never that simple.

I enjoyed watching both of these shows. They are gripping and the story lines just suck me right in every season!

Where can you buy?

Check out our other related posts:

The only compensation received for any review post, is a sample of product. Compensation never has a bearing on the outcome of a review. The opinions expressed herein are those of blog author only. Blog author never gets paid to post.

Thanks for stopping by Eighty MPH Mom! To learn more us, click the "About" tab above.